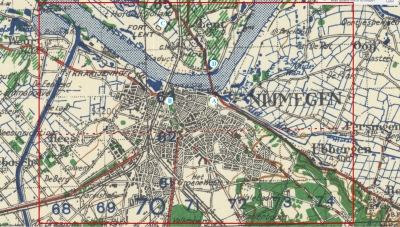 This third game in the KGC III Campaign sees one of the most heavily contested battles in Operation Market Garden: Nijmegen. Many see Nijmegen as the battle where Market Garden failed, and as a wargame scenario it is a real challenge for the Allied forces.

The 82nd ‘All American’ Airborne Division was dropped to the South East of Nijmegen around the Groesbeek Heights which was seen as strategically important. US forces were expected to protect the vulnerable right flank of the Allied armoured thrust from the nearby German forces in the Reichswald forest.

Additionally, several bridges required to be captured, including Grave and the Rail and Road Bridges at Nijmegen. On the 17th of September Grave bridge was captured and the Groesbeek Heights were secured. The main direct route bridges on the Maas-Waal Canal were blown but another secondary crossing was captured. However it was only till late on in the 17th that two companies of infantry from 1/508th was sent into Nijmegen to try and capture the bridges. This was very unfortunate as early on the 17th the Bridges were only lightly defended. However, becoming aware of the importance of the bridges as the 17th worn on, scratch troops had been sent into Nijmegen and Kampfgruppe Henke had been coalesced to try and defend the bridges and these repulsed the US Paras, with German motorised reinforcements arriving just as the Paras attacked. During this initial fierce battle it is thought that the demolition mechanism for the bridge was destroyed in the Post Office, which was to prove critical for the later battle for the Bridges.

The battle was to rage on into the 19th, and our Campaign now takes two alternate paths.

See map above. Table Outline is in red based on a standard 6’x4’ table with ground scale of 1inch=100 metres. One map square=1 Kilometer (10" on table).

When setting up the table we put numerous built-up areas on the table corresponding to the approximate area of Nijmegen on the map. We had the main red roads and red dashed roads, and the railway, deployed on table but not the wee minor roads which we classed as open ground. The main river, the Waal, itself was deployed as shown on the map and is 300 metres (3 inches) wide at Nijmegen.

The Fort Hof Van Holland and the Fort Valkhof were old fortifications and should be strongpoints. The SS engineers laid mines around the Valkhof.

We also deployed open areas South of both bridges to show the Kronnenburger and Hunner Park as per the map. This makes the Allied attacks more difficult.

Red Dotted Line: Allies- US Forces may deploy anywhere South of the red dotted line. Note this is in close contact with German forces.

Irish Guards & other Reinforcements enter from either of the two red marked roads on the map to the South or South West.

Historical deployment is as per the set-up above.

(see page 59 & 60) These games start with troops in contact so there is no pre-game reconnaisance or bombardment.

Scenario 3A 18th September to morning 19th September The scenario lasts for 8 turns. The first four represent the attacks by 3/508th afternoon of 18th September supported by Irish Guards battlegroup when they arrive, through to the morning of 19th when the Germans mounted a counter-attack at the Groesbeek heights infiltrating the landing zone.

In both Scenarios, victory is determined by the Allied players exiting at least three Irish Guards Units off the Northern road. Recce units do not count, and at least 1 Unit must be armoured. American Para infantry Units can also count if they are tank riding.

The Irish Guards and the 3/504th captured the river bank opposite the Fort Hof Van Holland early on in the morning of the 20th. They waited for the assault boats to arrive before they could cross the Waal. Meanwhile, bitter fighting between the SS defenders and XXX Corps and Airborne was ongoing in Nijmegen. At 3pm Major Julian Cook and two companies of the 3/504th with artillery support, Spitfires and fire from the Irish Guards tanks. Under smoke cover, Cooks men captured the Railway Bridge and the Grenadier Guards tanks started to roll over it and the Waal Road Bridge which was also then captured. German attempts to detonate the bridge charges failed.

With daylight running out and no Guards infantry support, and having encountered German anti-tank units on the other side of the bridge, the Guards halted. This was the final chance of reaching Arnhem in time.

This is a really challenging Scenario for the Allies, particularly 3B with the increased German forces and the 88’s.

The Germans must hold on as long as possible on the Nijmegen side where they have sufficicent cover to try and take on the armoured units. It is particularly difficult for the Allies to quickly make ground here against the SS and the Engineers. Over the river the troops are poorer and the terrain is more open, but the FLAK provide more firepower to take on the tanks.

Both sides need to use Artillery support wisely and this can be key to success.

3/504th may attempt a River Crossing over the Waal once they hold the southern bank of the river. In reality the 3/504th captured the southern bank on the evening of the 19th and were scheduled to go over at 08.00 hours on the 20th, but this was delayed and further delayed until 3.00pm.

In the game to simulate this, once the 3/504th capture a river bank, roll a d6 each turn with the assault boats arriving on a roll of a 6. Add a cumulative one to the dice each turn after the first.

Crossing the River should take a move order per Company, with only 1 company crossing at a time. Bear in mind there will be no cover for those crossing, and they will require appropriate support.

Following forces found in Both 3A & 3B Scenarios:

Transport: for Pak only.

3B only: SS Reinhold, North Bank